Xochimilco is a word with a Náhuatl etymology; that was Aztec language and whose meaning is “In the Seed of Flowers”. It is a beautiful place located at the south of Mexico City that was declared a World Heritage Site by UNESCO in 1987. Known for its peaceful canals and greenhouses, Xochimilco is one of the most visited sites by national and foreign tourism. In addition, Xochimilco is a clear example of the way the Aztecs and their predecessors moved through the lakes that existed at that time. We will learn how their former inhabitants managed to solve their need for cultivating lands by creating small islands that are known as "Chinampas" or "Floating Gardens" where they grow plants and flowers, as well as corn, beans, rice and chickpeas, among others.

We will take a relaxing ride aboard a typical Trajinera (a non-motorized boat) sliding gently on its beautiful canals surrounded by greenhouses and farmland while enjoying exquisite Mexican dishes or delicious fruits like mango and jicama with chili. You can drink a refreshing water of horchata or tamarind or better still, a cold beer. While being entertained by a cheerful group of musicians playing an excellent repertoire of typical Mexican songs and sing along if you know the songs or dance if you prefer. Remember you only live once, live the moment and enjoy yourself.

Xochimilco is a place full of traditions, of dark stories like "La Llorona" and "The Island of the Dolls" or of fervent devotion as people have to the Niñopan (Child-Father), in other words, the representation of the Father God. Xochimilco is home of a 220 year old tradition, a competition that takes place on Good Friday in Holy Week, "The Ejido’s most beautiful Flower" where the most beautiful women of the 18 neighborhoods of Xochimilco compete with each other to become Xochiquetzal, "La Flor de Pluma Rica", the personification of beauty and love, Goddess of flowers and the patroness of domestic chores. 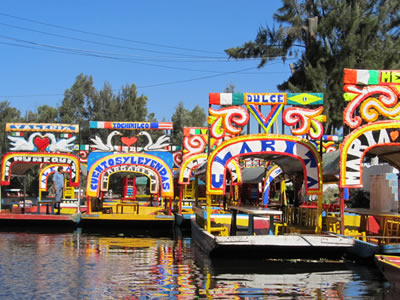 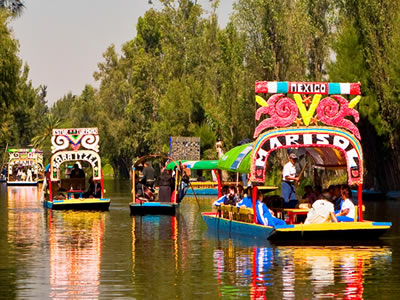 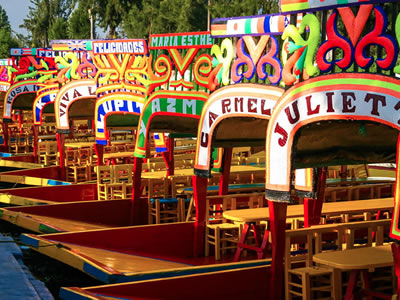 Later, we will visit the Dolores Olmedo Museum that used to be the former house and art collection of the famous Mexican businessperson, philanthropist and friend of Diego Rivera and Frida Kahlo. In 1962, Dolores acquired La Noria, which she would later convert into the Museo Dolores Olmedo. First opening in 1994, this museum features her entire collection of art including contemporary, folk, and pre-Hispanic art. Her friendship with Frida Kahlo and Diego Rivera also resulted in her amassing a large collection by these famous Mexican artists. Of all the art museums in Mexico City, the Dolores Olmedo has the greatest collection of work by Frida Kahlo. The complex is spread over five buildings and features many works of art along with her original decorations of the house, including china. Dolores Olmedo died in 2002 and left funds for maintenance of her museum. 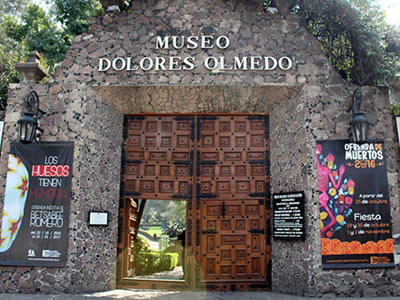 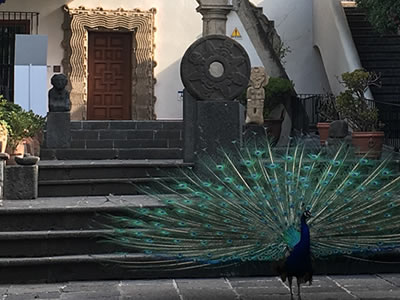